You are almost there. Please provide us with your email.
We won’t use your information to spam or share it with anyone else. 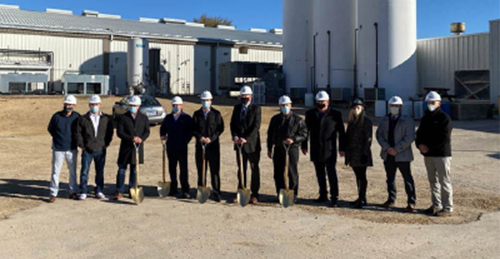 CHICAGO — Hispanic Cheese Makers-Nuestro Queso is celebrating a significant expansion at its facility in Kent, Illinois. The $15 million investment includes new processing and packaging equipment, expanded cooler space and additional capacity to meet demand for further expansion in the future.

The project is the latest phase of a comprehensive strategic plan that began two years ago when Hispanic Cheese Makers developed its long term sustainability investment plans. At that time, the company installed new state-of-the-art systems to utilize reverse osmosis to purify its water to extremely high-quality standards, Braun notes. Hispanic Cheese Makers constructed state-of-the-art water treatment systems irrigating 100 acres of farmland. The company also upgraded its lighting to LED and began to source power from renewable energy sources, as well as installed insulated high-speed doors on its coolers and upgraded refrigeration systems to be more efficient.

“This is part of our holistic approach across our operations to set goals and standards for the company to reflect our focus on quality across the entire manufacturing process, including sustainable systems and operations at the plant level,” Braun says.

Founded in 2009, Hispanic Cheese Makers produces its cheeses and cremas using original recipes at its SQF Level 3 certified plant and has a number of capabilities including on-site shredding, grating and packaging. The upgrades to its processing and packaging lines under this expansion project will help the company to improve operational efficiencies and add capacity, as well as further improve food safety, Braun notes.

“For example, our south make room will be expanded, not in footprint but by removing walls, and we’re repurposing our shred room and putting in several million dollars’ worth of new, state-of-the-art equipment, including a new cheesemaking and batch processing systems,” he says.

In addition, the company is adding a significant amount of new cooler space onto its existing plant. “With this phase, we are looking to address bottlenecks that we have or will have for cooler space for finished goods,” Braun says. He notes the separate cooler space allows the company to work on the upgrades without disrupting its day-to-day operations — though by project’s end, the facilities will be connected. The company also will be adding additional loading docks and has made investments in the land around its facility for future expansion.

“We’ve purchased a significant amount of farmland and surrounding properties to allow for further expansion as well as for traffic and trucks that will be running product with our increased capacity,” he says.

He adds the company has utilized local firms for each facet of the expansion, and the local community has been supportive, especially given the company’s investment in the land and surrounding properties.

“The local professional services firms — architects, engineers, law firms etc. — that we have utilized all have been positive contributors to making this happen,” Braun says. “And of course, our company board as well. They have committed to the investment in this vision.”

To celebrate its expansion, the company today held a ground breaking ceremony with county officials.

“We want to show who we are and what we’re trying to do in the community,” Braun says.

He adds that despite it being a challenging year across the industry with COVID-19, Hispanic Cheese Makers felt it was important to make this investment as its plant expansion will benefit the local economy through increased investment and the creation of new jobs at a time in which most companies are scaling back.

“This plant expansion solidifies Hispanic Cheese Makers-Nuestro Queso’s place as one of the premier Hispanic cheese manufacturers in the nation, and it will continue to fuel growth in the Stephenson County, Illinois, area for years to come,” Braun says. CMN